TAKE IT TO THE TOP! KIA MOTORS TOPS JD POWER AS #1

TAKE IT TO THE TOP! KIA MOTORS TOPS JD POWER AS #1 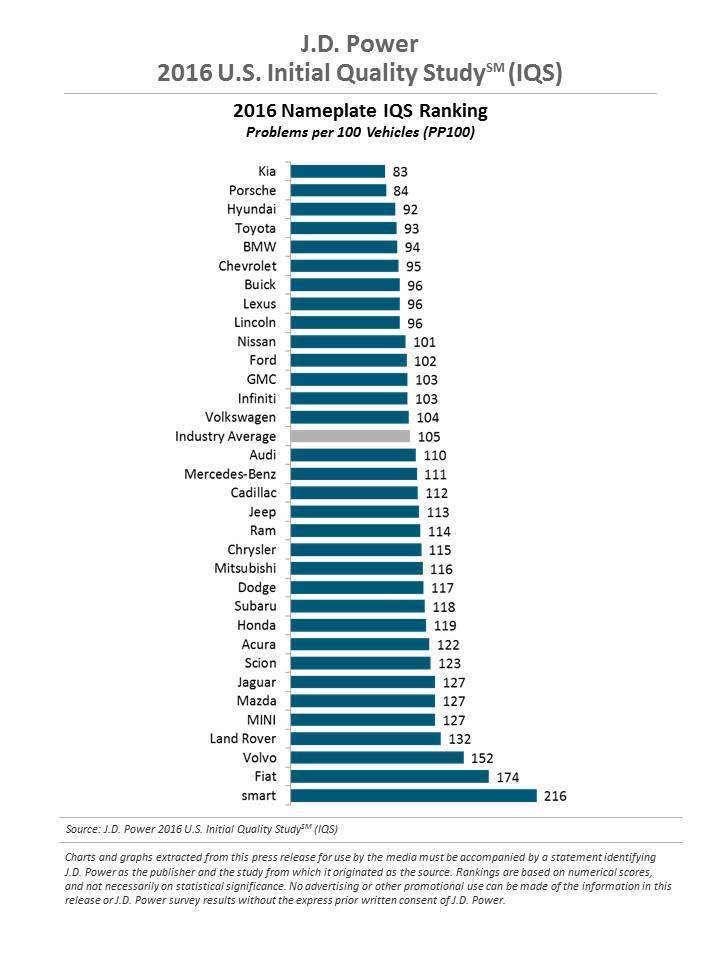 Quality improves across all eight problem categories measured in the study, with 21 of the 33 brands included in the study improving their quality in 2016 and one remaining the same.

“Manufacturers are currently making some of the highest quality products we’ve ever seen,” said Renee Stephens, vice president of U.S. automotive quality at J.D. Power. “Tracking our data over the past several years, it has become clear that automakers are listening to the customer, identifying pain points and are focused on continuous improvement. Even as they add more content, including advanced technologies that have had a reputation for causing problems, overall quality continues to improve.”

Following are some of the study’s key findings:

U.S. Domestic Automakers Show Strong Improvement: For just the second time in the 30-year history of the study, U.S. domestic brands collectively have lower problem levels than all their import counterparts combined. All three U.S. domestic automakers post year-over-year quality improvements. The “Detroit Three” achieve a combined average of 103 PP100, improving 10% from 2015, which is double the improvement rate of the import brands at 106 PP100. The last time U.S. domestic brands outpaced imports was in 2010, when they held a 1 PP100 advantage (108 PP100 vs. 109 PP100, respectively).
Non-Premium Brands Have Fewer Problems: For the first time since 2006, non-premium brands have fewer problems (104 PP100) than premium brands (108 PP100).
High Quality = High Loyalty: Expected reliability remains the most important consideration when purchasing a new vehicle, cited by 49% of owners. J.D. Power has studied consumer behavior from when they purchase or lease their new vehicle through when they are back in the market for their next vehicle in order to measure the impact initial quality has on brand loyalty.[1] Among owners who experience no problems with their vehicle in the first 90 days, 54% stay with the same brand for their next vehicle. Loyalty drops to 50% among owners who experience one problem with their vehicle and to 45% among those who experience three or more problems.
“There is a direct correlation between the number of problems a customer has with their new vehicle and the decisions they make when it comes time to purchase or lease their next car or truck,” said Stephens. “While a small drop in actual loyalty may not sound like much, a percentage point drop in share can mean millions of dollars in lost revenue to an automaker.”

Highest-Ranked Nameplates and Models
Kia ranks highest in initial quality with a score of 83 PP100, the first time in 27 years that a non-premium brand has topped the rankings. It is also the second consecutive year that Kia, which ranked second in 2015, has led all non-premium makes in initial quality.

Chrysler and Jeep are the most improved brands, each reducing the number of problems by 28 PP100 from 2015.

The 2016 U.S. Initial Quality Study is based on responses from more than 80,000 purchasers and lessees of new 2016 model-year vehicles surveyed after 90 days of ownership. The study is based on a 233-question battery organized into eight problem categories designed to provide manufacturers with information to facilitate the identification of problems and drive product improvement. The study was fielded from February through May 2016.

Find detailed information on vehicle quality, as well as model photos and specs, at jdpower.com/quality

For more information about the 2016 U.S. Initial Quality Study,visit http://www.jdpower.com/resource/us-initial-quality-study-iqs