The 2016 Chicago Auto Show is in full swing and Kia’s impressive 21,000 square-foot exhibit is now on display in the Windy City. This year, Kia Motors presented 14 vehicles across various segments that showcased our innovative style and eye-catching vibrancy. While each model shone on its own merits, the headliner of the event was the newly released trio of green cars under Kia’s EcoDynamics sub-brand. 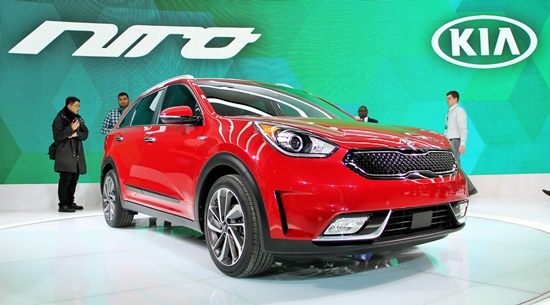 The brand-new Niro Hybrid Utility Vehicle (HUV), first announced last November and teased at 2016 NAIAS, is among the three newly unveiled Kia hybrid vehicles and a forerunner in Kia’s 2020 green car roadmap. Envisioned as a hybrid car with a deliberate un-hybrid-like design, the Niro presents as a practical yet stylish package featuring a striking design, functional utility and cutting-edge hybrid technology.

The Kia Niro resembles a small, stylish SUV, currently the hottest segment in the industry, and offers outstanding fuel economy with a newly engineered hybrid powertrain. Check out the full Kia press conference, including the Niro reveal, below.

The all-new Kia Optima Plug-in Hybrid (PHEV) also made its global debut as our very first PHEV model. While it still maintains many of the luxurious features of its traditional powertrain counterpart, the Optima Plug-in Hybrid offers exclusive elements that make this new hybrid vehicle a valuable addition to Kia’s commitment to a green future.

The new Optima PHEV offers seamless transition between EV, gasoline and hybrid driving modes with uncompromised power and fuel economy. The model is expected to hit the global markets during the fourth quarter of 2016.

Kia’s three new eco-friendly models are not the only vehicles available for viewing at our booth at the 2016 Chicago Auto Show. The newly upgraded 2017 Kia Forte (Cerato/K3) and the Telluride concept, along with nine other production models, will be available for viewing on the show floor until February 21. If you can’t make it to McCormick Place Convention Center, be sure to check out Kia’s social media channels for more news about the event!